Meeting Mikhail taught me just how much we lovely humans need each other even when we meet for the first time as strangers. It was the first time in my waking life that I can remember seeing a person’s face light up (which probably means I just haven’t been paying close enough attention when I’m talking with people or that people’s faces don’t light up as much as they ought to which is sad) and it was one of the best little adventures I’ve ever had.

I was still getting used The Office and still feeling everyone out, so to speak, when I plucked up my courage and met Mikhail. I had just moved into the office suite probably two or three weeks earlier and I was definitely nervous about being in this new environment, though I was getting a front-row seat to the crazy shenanigans. I’d noticed Mikhail pretty much the first time I saw him, mainly because he seemed extremely tall. Then again, when you’re 5’2”, everyone seems “extremely tall”…. But he caught my attention because he shuffled when he walked and ducked his head whenever he was passing me or anyone else in the hallway. Almost like he was very aware of his height and was trying to make himself appear smaller and unobtrusive.

I get attached to people pretty quickly, even and perhaps especially when it’s someone I don’t really know 🙈 I just notice the little quirks about them and I find them endearing and they warm my heart. I dunno if it’s a superpower or a dangerous tendency that will allow people to take advantage of me or if it’s even normal but I do know it’s the way the Most High made me and, after some wrestling, I really wouldn’t change that part of me for anything. He allows me to see a little bit behind the facade we humans put up in front of one another and to pierce the walls of a person’s soul so that little rays of Beauty shine through and I can see them, really see them.

Yes, I need to be careful because, as I’ve discovered once or twice, some people are knaves and their facades are pretty but their souls are dark. So I’m cautious but curious. Mikhail’s soul might be dark, who can tell? But for now, the bit I’ve seen is lovely.

As I’ve mentioned in previous posts about The Office, the Keurig is the scene of many a shenanigan or two. In fact, just today, Rina brought in yo-yos she had “just made”, passed them out, and everyone began playing with them like children. The sound of yo-yos clicking up and down, up and down, up and down filtered through the hallway. Rina basically guaranteed that no work would get done for the rest of the day. Toby taught Mandy how to properly handle her contraption while Kristoff and Jessa happily played with theirs in the hallway in front of the Keurig. Ah yes, that’s how I got to this digression. The Keurig. Next week, I’ll have to write about the rest of the shenanigans that took place today since this post’s supposed to be about Mikhail, not yo-yos. But I kid you not, I don’t make this stuff up. It’s like a real-life incarnation of the show The Office and it’s grand.

So back to Mikhail and the Keurig.

A newcomer to The Office, I preferred to get to know people by watching their movements and listening to their conversations. Stalker-ish, I know, but that’s just how I operate 😀 I’d rather see how you behave when you don’t think you’re being observed because that clues me in to what kind of a person you are and whether or not I’d feel comfortable approaching you. So I hardly ever initiated conversations save for the cursory “hi” and the slightly-more friendly “good morning”. Except for the Keurig. I dunno what it is exactly but I’m labeling it The Keurig Effect. Something about standing in front of our cute little kitchenette area while we wait for our coffee or warm up our lunch in the microwave just loosens the tongue. We find courage we didn’t know we had.

I stopped by The Keurig for my second cup of coffee and discovered Mikhail was there already. Now I really can’t remember if I knew his name then or not but I definitely knew him by sight. He and Toby work similar positions in The Office, dragging tech equipment around campus to different buildings when stuff breaks down. Mikhail didn’t intimidate me in general or anything but I still felt a bit nervous about initiating a conversation. I plucked up my courage and did it anyway because for all my “observing”, I wasn’t really gonna get to know any of these people unless I spoke to them.

Not knowing really what to say, I asked Mikhail how tall he was. I had already prepared a reason for my perhaps-odd question in case he asked. I’d just blame it on the fact that I’m a writer and I see story material everywhere in life and I’m constantly on the look-out for ways to bring my characters to life…such as making sure their heights are accurate and knowing exactly what their height would look like in real-life. In other words, I sometimes use real humans as references for my beloved characters 🙂

Thankfully, I didn’t have to resort to my back-up plan (yet another reminder that most of the things we worry about in life seldom come to pass) because Mikhail took the question in stride. He half-angled his body to face me as he waited for his coffee. “I’m six-foot-two or six-foot-three depending on what shoes I’m wearing.” He said it kinda sheepishly as he stood with his shoulders a bit hunched and his head ducking down a little. I noticed his yellow Timberlands and smiled. They for sure added an inch or two.

Then, without any prompting, Mikhail launched into a description of his family members, both immediate and extended. I found out his older brother is the tallest at 6’6 and he’s got a few nieces who are 6’0 or 6’1 but they don’t seem to mind. That’s when Mikhail’s face lit up. I asked him additional questions, nothing profound or deep but I had touched on a subject which was right in his comfort zone and I watched him take off. His coffee finished brewing but he kept right on talking and that’s when you know someone’s really interested in whatever conversation you’re having. After whatever exterior thing has kept them in the conversation has disappeared or become irrelevant, after that happens, if they’re still talking to you, then you’ve hooked them and you’ve got their full attention.

I half-turned towards him to let him know I was still in the conversation even though I sort of had to have my back to him while I was making my own coffee, and on he went. I told him I was 5’2 so I always noticed when people were taller than me. He smiled and mentioned how his nieces don’t mind being taller than most guys even though he thought they might.

My coffee finished brewing, we parted ways, and I was incredibly thankful the Most High had given me the courage to step a bit outside of comfort zone and see past the facade we humans put up. Mikhail ducked his head awkwardly as he went back around the corner to his own office but I’ll never look at that Timberland-clad, pony-tail-wearing, tall man the same way again. He doesn’t dress sharply and with his faded brown leather jacket, low messy pony-tail, clunky Timberlands, and faded baseball hat, he won’t turn anyone’s heads with admiration when he walks in a room. But he’s a lovely human. He spoke to me when he could have ignored my strange question or just given a three-word answer, remained silent until his coffee finished brewing, and walked away. In a time when kindness and common courtesy are so rare, they’re mistaken for flirtation, conversations like the one I had with Mikhail are treasures indeed.

Mikhail is still awkward and shy, though he can be assertive and vocal when he’s talking about frustrations in The Office, but I don’t mind. He sort of averts his eyes whenever we pass one another in the hallway but he smiles back whenever I say “hi”. We’ve had a few more adventures together via The Keurig Effect and we both agreed that siestas should be part of American society. He admitted that he feels a nap coming on around 1 pm each day and instinctively goes for a coffee and his MO has been pretty consistent. It’s been grand fun learning everyone’s quirky rhythms like how The Bros (Kristoff, Toby, and Steve) leave to play basketball in the gym at 11:50 am on the dot every single day.

So though I don’t see Mikhail as much as I see some of the others (since his office is a few feet away from the front desk and not in the hallway), I’m still glad we were able to share in that little adventure. The Frederick Buechner quotation I began with holds true. We really need each other, lovely humans. The Most High created us as relational beings; He even said that it wasn’t good for Adam to be alone. He wants us to reach out to one another even as strangers. 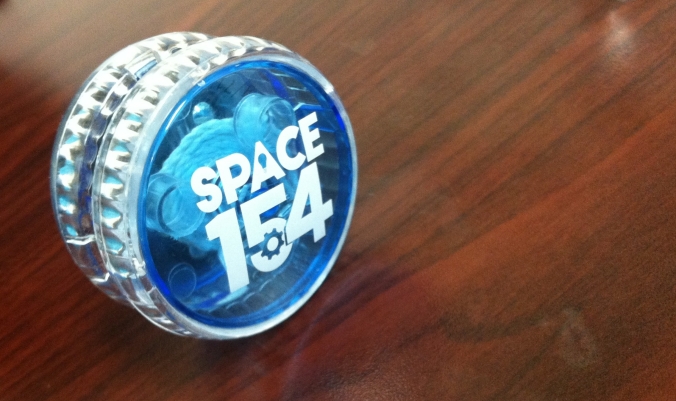 The culprit of the day and the subject of next week’s post, aka one of Rina’s yo-yos which also happen to be pretty smashing.
P.S. Space 154 is the name of one of our tech rooms 🙂